Our story so far: While the plumber, electrician and HVAC guys worked on the old Methodist church we were turning into our home, so did we.

A week or so later, Tyler loomed over the bed at 5:50 a.m. on a Saturday. “Home Depot opens in ten minutes. Time to get out of bed!”

Did I mention Tyler was an early riser?

I complied. Fortunately, Starbucks was on the way to Home Depot and Tyler deigned to stop. So at least I got some coffee.

We proceeded to Home Depot where I watched him walk the insulation aisle, checking packages.

“This is the one! Grab that cart.”

We took only one pink loaf of blow-in insulation back to the tool rental desk.

“How many packages come on a pallet?”

No kidding. That earned us the bulk discount, but we still invested four figures in insulation.

Two pallets of insulation did not both fit into the back of the truck. So I drove one pallet back to the church and went right back to Home Depot for the second one.

Just about the time Tyler had cut all thirty-six loaves of insulation in half in our front yard, Reroofer arrived.

Reroofer, the trusty roof expert who worked on our belfry, didn’t know he was going to be helping with insulation, but he was game for anything (apparently he had had his coffee, too).

The assembly line began. Reroofer climbed into the space between the sanctuary ceiling and roof with one end of the hose, while I fed insulation a half loaf at a time into the blower outside the front door. Tyler supervised (more than once he reassured me that Reroofer was upright and ambulatory inside the attic rather than being buried by a mound of pink insulation—“He’s fine! Now get back out there and mind the blower!”).

I found the job strangely satisfying. As the blower consumed half-loaf after half-loaf, the enormous pile of pink insulation slowly but consistently disappeared.

Four hours later, plus or minus a couple of breaks, we were done.

Or at least I was.

I went home to shower. 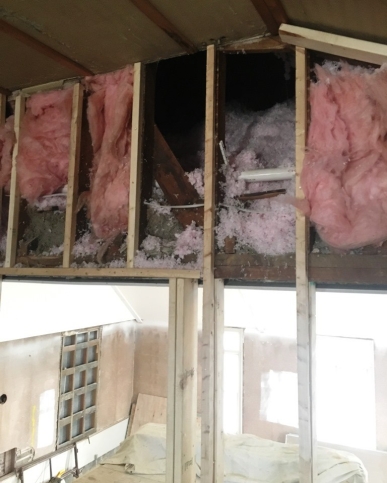 Tomorrow: Not everyone hit the showers. Reroofer wasn’t done yet as Chapter 21 concludes. Read it here.

Available May 5–The Book!