We have a fireworks store in our little village just over the border from Illinois, and it’s evident the populous frequents the place. Pop, pop, pop, whir, bang! Twilight erupts with real-life sound effects around here on a holiday weekend.

I captured this rare evening photo of the church sign last night as some neighbor kids lit street sparklers in the background. My “mighty flame” message is both inspiration and a warning, te he.

Here’s hoping we Americans take advantage of the blessings of liberty for the greater good. Happy Fourth of July!

In honor of Earth Day today, I’m sharing images of beauty taken over the past four years in my yard, specifically the front garden.

I can take no credit for this flower garden. It was originally planted by members of the congregation who used to attend church in what is now our home. It’s now tended by my husband, our hired man and my husband’s uncle when he pays us a visit.

But tulips aren’t the other perennial growing in this garden.

Happy Earth Day. Save the earth, and the earth will save you.

A reminder for Labor Day weekend …

We hold these truths to be self-evident, that all men are created equal, that they are endowed by their Creator with certain unalienable Rights, that among these are Life, Liberty and the pursuit of Happiness. 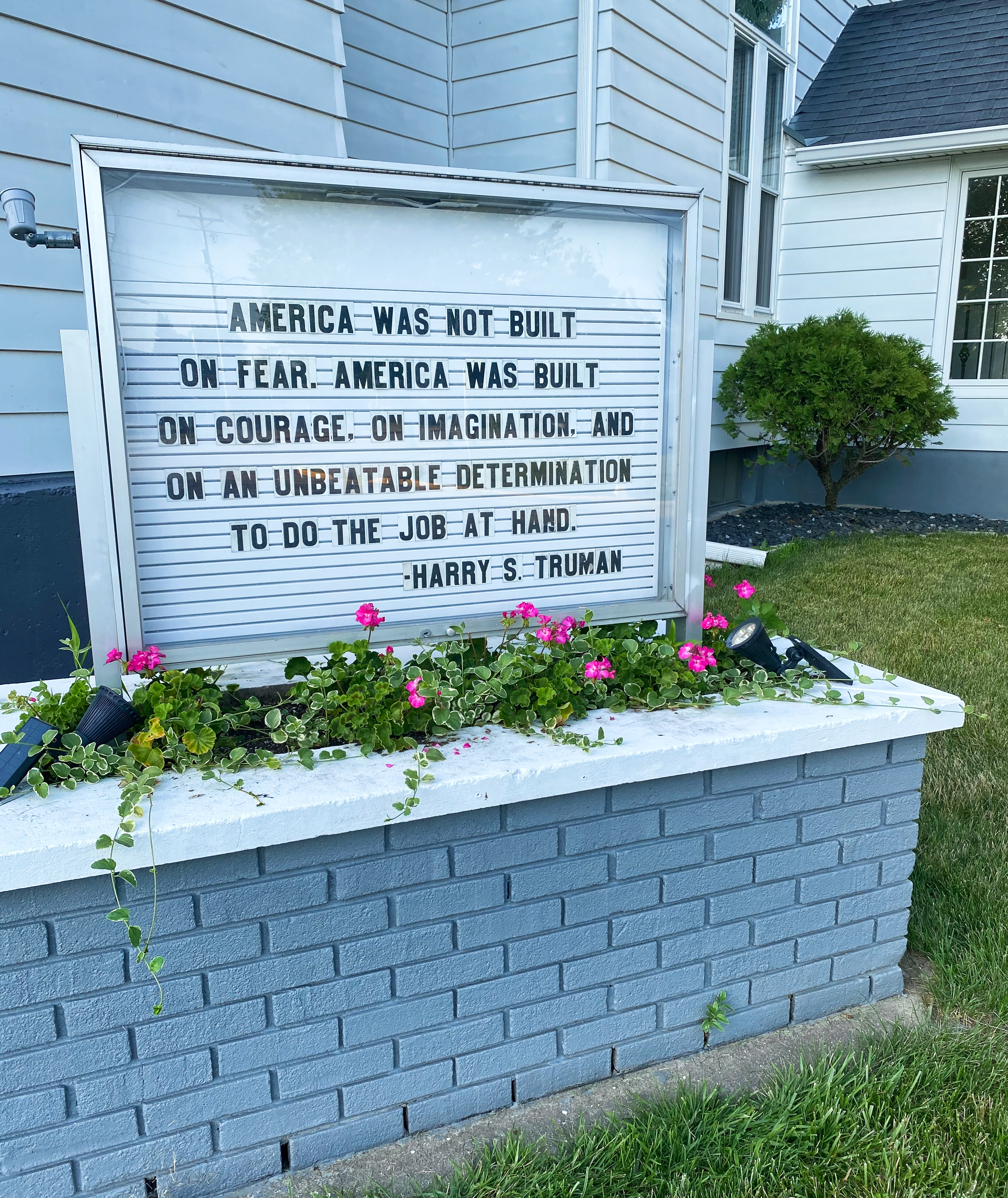 I almost ran out of A’s and Ns for this Fourth of July message on my church sign, but the period after the S in President Truman’s name was probably not necessary. His middle name was simply S, which his parents chose to pay homage to honor and please his grandfathers, named Anderson Shipp Truman and Solomon Young.

Truman might be better known for declaring where the buck stops, but this wordier message is a good one, too.

Passersby can choose to apply whatever subtext they want. “Be brave and go back to work” or “Do the job at hand of wearing a mask in public” or both. I hate how everything nowadays has political implications, forces us to choose sides and cultivates suspicion of one’s motives. Can’t we all just get along?

I love America. I love our messy system of government, I love peaceful public protest, and I love Mount Rushmore, too. It’s an majestic work of art, even if you don’t think much of the men whose faces are depicted there or you believe it’s built on stolen land. We’re still forming a more perfect Union, folks, not to mention establishing justice and ensuring domestic tranquility. The work of we the people will never be done.

Tonight, Tyler and I are going to ring our church bell at sunset and watch the full moon rise over the treetops, and I’m going to celebrate the freedoms wrought, however imperfect, by the men who signed the Declaration of Independence 244 years ago. I hope you find blessings of liberty, too, however you observe today. Happy Independence Day!

It’s Memorial Day. You have the freedom to observe it with solemnity or celebrate it with joy (and barbecue sauce). However you spend it, please do it in accordance with the health guidelines of your locality and treat the essential workers you encounter with respect.

By the way, if you live in the vicinity, open your ears at 9 a.m. I am ringing the church bell this morning in observance of the holiday. 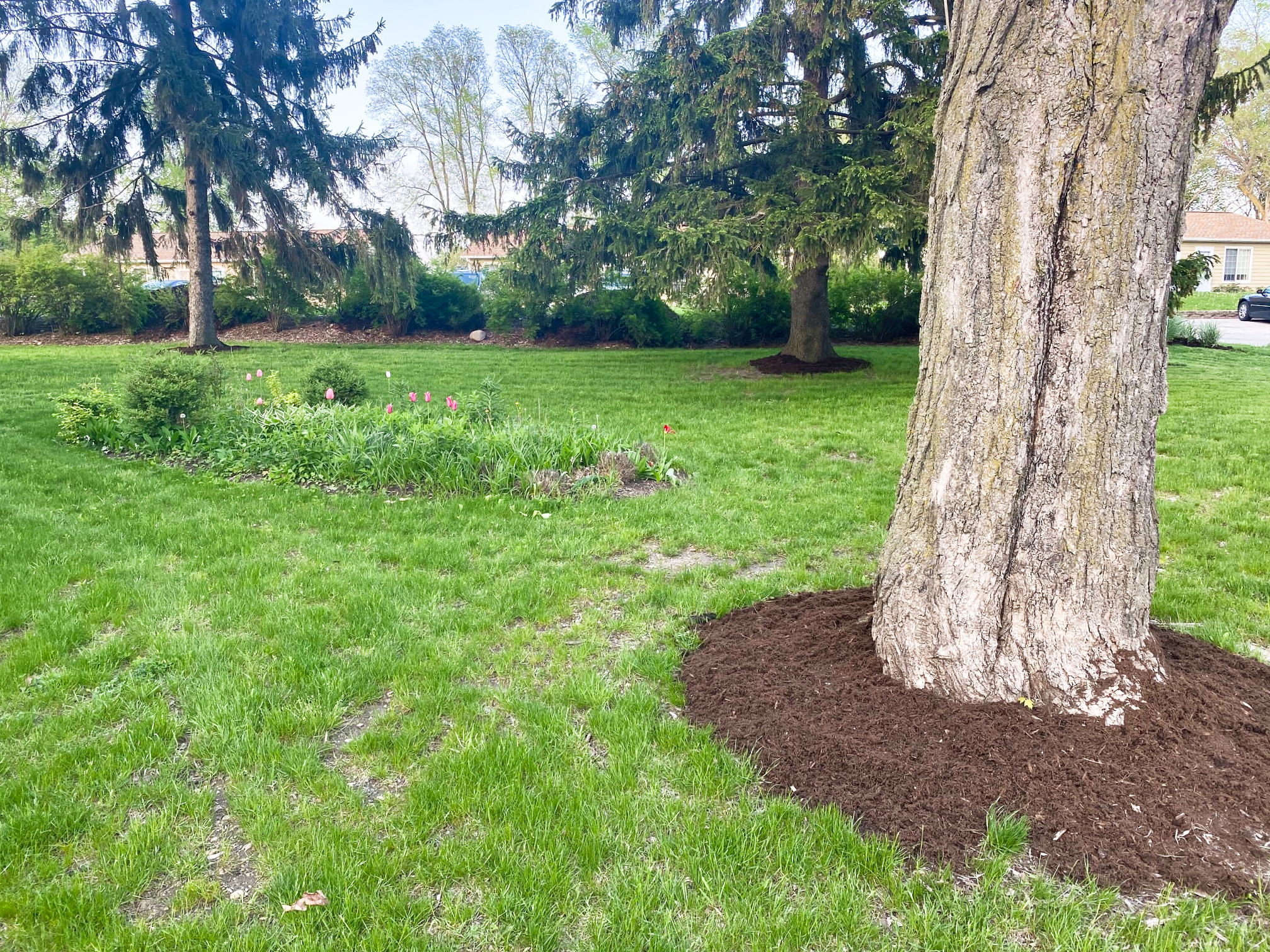 Mr. Go Big or Go Home borrowed a dump truck and hauled eleven loads of mulch today to tuck our trees and bushes into bed.

And then Tyler picked up a load of mushroom compost for the vegetable garden (an even dozen dump truck loads of material).

Tyler reported that Home Depot was packed late this afternoon. The check-out line in the nursery department was forty gardeners deep (he transported his purchases inside for self-checkout). Watching the activity around here, one might be forgiven for mistaking this for labor day weekend instead of Memorial Day weekend (I worked up a sweat documenting it). 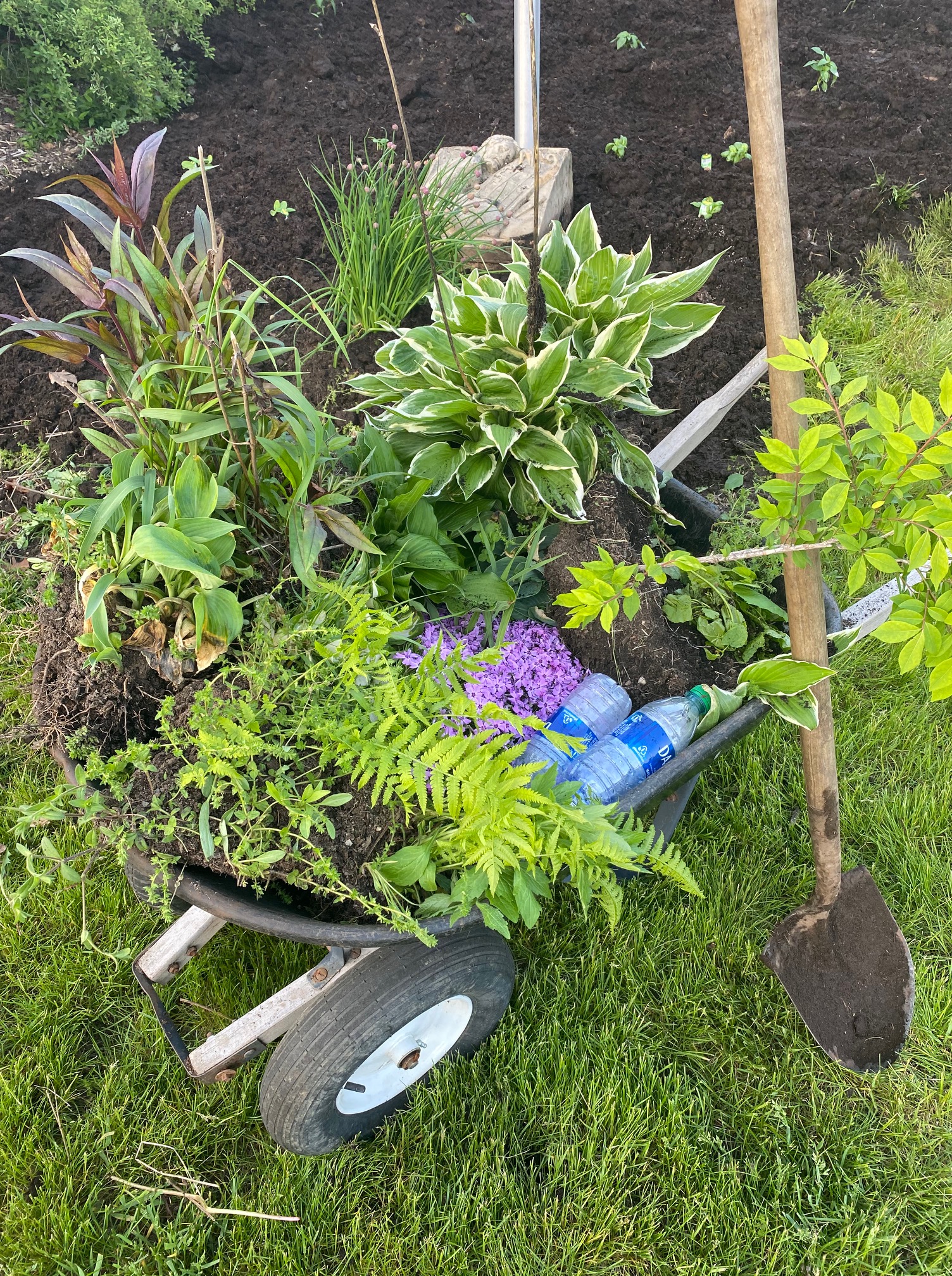 When you have an open floor plan and 20-foot ceilings, you have choices. Like where to situate the Christmas tree. 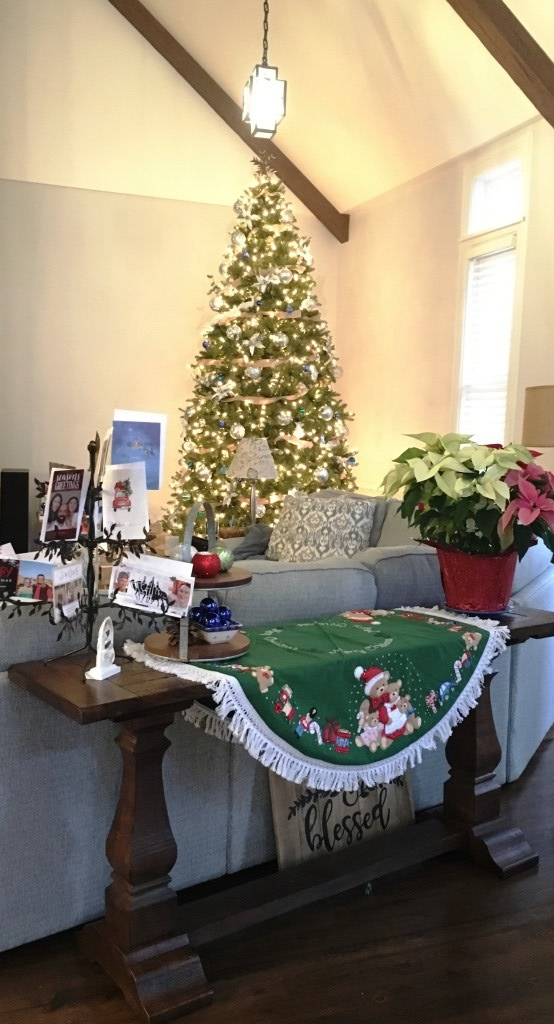 Last year, we erected our brand new 12-foot Christmas in the front corner of the church, mostly because that corner was still unfinished at that point, and a tree filled the empty space. Putting up a 12-foot artificial tree took some effort (which I recount here), but it was lovely.

This year, I dug the five pieces of the tree from out under the eaves on the second floor, drafted a little help (St. Johnny) to get the pieces to the main floor, and the three of us reconstructed the tree in the back of the church at the entryway.

Since last Christmas, that front corner got new built-ins and we put the barrel-top desk there. No room for a tree. But there was a big open space in front of the double doors of the entry, and as long as we kept the Christmas star away from the ceiling fan, there was plenty of space to fill.

Once assembled, I spent a hour fluffing the boughs that were crushed in storage and another hour trying to figure out why one row of lights didn’t work, but all was put right in the end.

Now we can walk all the way around the tree (which is a first for any Christmas tree I’ve ever decorated inside a house), but that just leaves more room for gifts.

I hope you are finding newness and joy rather than drudgery in your holiday preparations. Here’s to a blessed season of Advent. 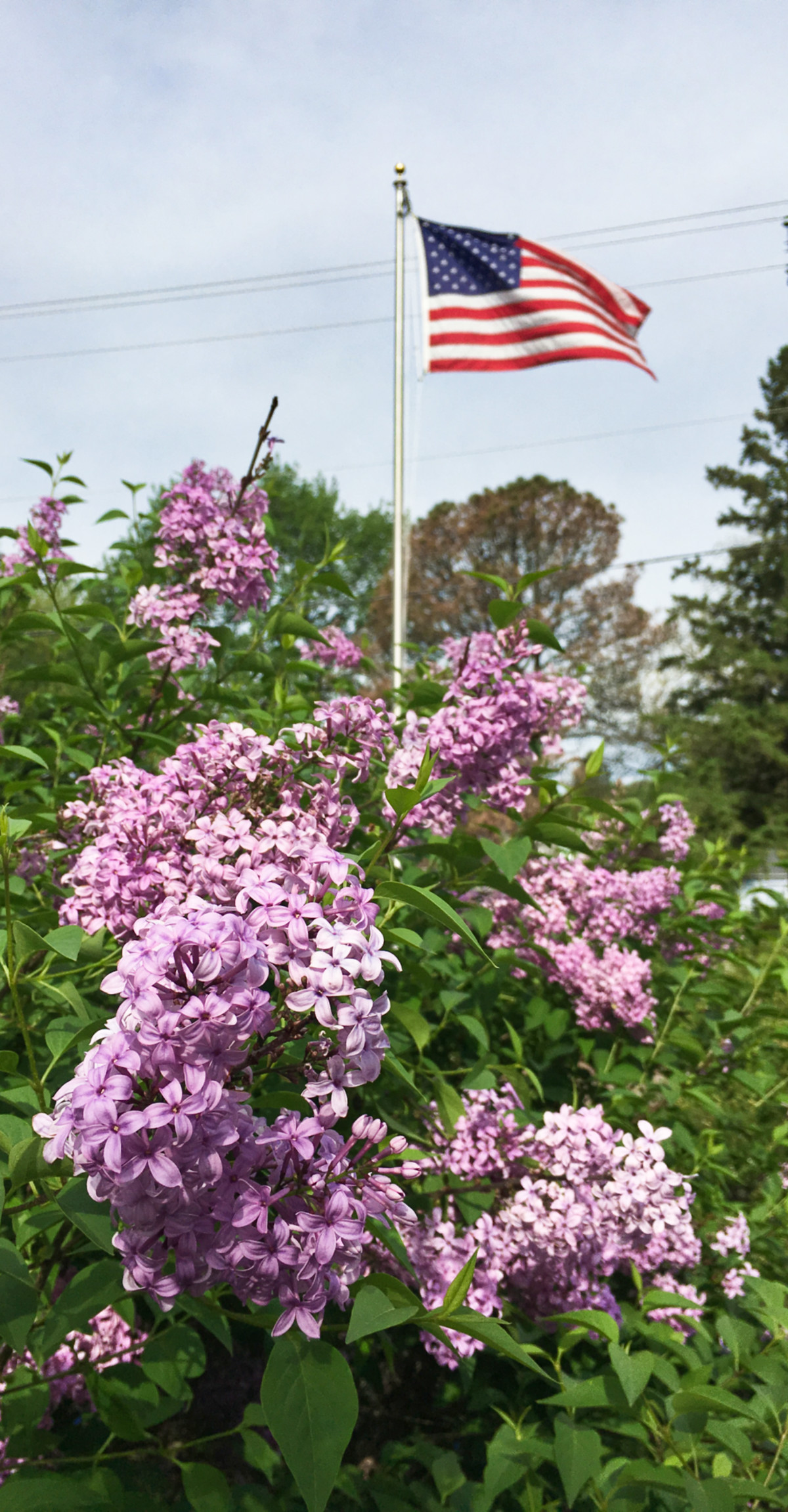 It’s Memorial Day, and the lilacs are heavy with fragrant blooms as they ought to be in late May. I have two more lilac bushes on my property that I didn’t realize were ours last year when I counted only one bush. Though choosing a favorite flower is a bit like choosing a favorite child, lilacs are among my favorite.

Memorial Day is for remembering and honoring people who have died while serving in the U.S. Armed Forces. Stop, smell the lilacs and remember a soldier.

Teddy Roosevelt spoke these words in an address at the opening of his gubernatorial campaign for New York in 1898. He was a war hero, fresh from the Rough Riders’ Battle of San Juan Heights in Cuba during the war with Spain. Three years later, he would become president.

Our little church was just seven years old when Roosevelt was running for governor five states away.

I chose Roosevelt’s quote because it was appropriate for commemorating America’s fallen solders on Memorial Day but also because it reflects the greatness of our little renovation project, which demanded much effort, sacrifice and certainly courage.

Wishing you a blessed Memorial Day weekend that includes a moment to ponder the sacrifice of the soldiers who make it possible and the ways you can live up to such high ideals.

The glut of holidays at the end of December had us ringing our church bell with regularity. Now that is it operational again, we welcome opportunities to use it.

We try to be respectful. It’s a bell in a former church, after all.

So far, no one has complained. At least to our faces.

We’ve been ringing to the bell once or twice or letting our guests do so whenever we have a tour of the church, which occurs with some regularity, maybe once a week. People are curious, and in some cases, our various contractors have enjoyed showing off their work here. So when we walk through the second floor, I will invariably yank on the bell pull to show off the unique feature of our home.

But for winter solstice–the shortest day of the year marking the beginning of winter–we ran the bell twelve times at sunset: 4:23 p.m. on December 21.

My birthday was December 23, so I rang it six times at noon (one for each decade and partial decade of my lifetime). We discussed ringing it once for every year, but that certainly would have ticked off the neighbors! (My father, who helps at funeral services with his local funeral home, also objected to ringing it once for every year because that’s what some churches do at funerals; since I’m not dead yet, we didn’t want to commemorate that).

Our belfry was quiet for a few days until New Year’s Eve. If ever there were an appropriate time to ring our bell at midnight, this was it! I sort of rang a church bell one other time on New Year’s Eve. My priest threw a “Y2K be damned!” party on December 31, 1999, and he let me and my then-husband ring the bell at midnight. Only the bells on the cathedral were electronic and operated by pushing buttons (still, that was exciting if only because January 1, 2000 arrived without any fanfare beyond midnight bells).

Tyler and I planned a small get-together that disintegrated when one of our guests came down with the flu, so it was just Tyler and me celebrating the new year in the church. Then, as is his wont, he turned in early. So ringing the bell was up to me. My father joked with me earlier in the day that he wasn’t going to visit me in jail if I got arrested for disturbing the peace.

I stayed awake with reruns of “Friends.” At 11:55 p.m., I crept upstairs. It was a warm night (for December), and I opened the belfry window so I could hear the bell better.

Instead of ringing the bell a certain number of times, I decided to ring it for a certain amount of time–one minute.

About halfway through the minute, I could popping sounds I hadn’t heard on the other days we rang the bell. I thought for a moment I had broken it! But then I realized I was hearing fireworks through the open window. (See! I wasn’t the only awake in our little town. Whew!)

When I was done, I looked through the belfry window at the now quiet scene below. No police cruisers had assembled.

Someone down the street yelled “Happy New Year! And thanks Methodist Church bell ringer!” I was stunned–and thrilled–that I had an audience. So I yelled “You’re welcome!” And they yelled “That was awesome!”

It was awesome, in the original meaning of the word: filled with awe. Not everyone gets to ring a real church bell at midnight on New Year’s Eve. I literally rang in the new year! I closed the window, turned off all the lights and sneaked into bed beside my husband, who was now wide awake. “Happy new year!” we wished each other.

I have no plans to ring the bell for any upcoming holidays (Tyler’s birthday isn’t until August). If you hear it ring, it’s because we have guests, and I’m showing off.