Our story so far: After two and half months of waiting to close on a 126-year-old church we intend to turn into our home, we finally get inside and start demolition revealing its odd and interesting wonders.

Five days after we closed on the church, the roofer showed up. Securing the bell tower was high on the to-do list after the seller had disclosed the roof was “rooted” and our pre-closing inspection revealed it was indeed rotted. With winter was closing in fast, so was our window of opportunity. 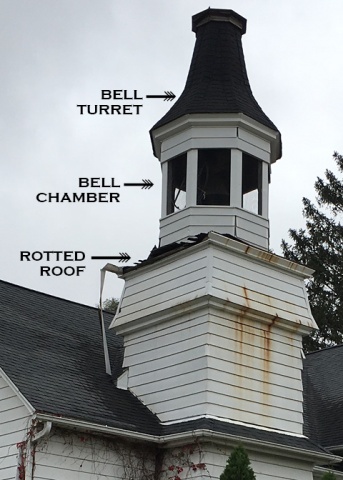 After a couple of different bids from roofers of various talent, we went with not a steeplejack, but a friend of a friend with a good reputation for flat roofs. For the purposes of clarity, a few definitions might be in order. The bell turret on our church—the ornamental feature above the bell chamber—appeared to be in decent condition and shingled with materials at least as new (or old) as the rest of the church roof. It was the flat roof floor of the bell chamber (beneath the bell) that was falling apart.

The roofer was a young man with a deceivingly slight build and a long reddish beard. He had a name, but in my imagination, I called him Reroofer, sort of the fairytale contractor version of Repunzel: “Reroofer, Reroofer, let down your beard!” Unlike Repunzel, though, he would not have been trapped in any castle towers; Reroofer had the agility of a monkey climbing around the belfry thirty feet off the ground.

Initially, Reroofer thought he could fix the holes in the roof in two days. After he was there a couple of hours, tearing off disintegrating shingles and ancient pieces of wood, Tyler called up to him from the ground and asked him how it was going.

“It’s worse than I thought.”

The bell, it turns out, was three-inch thick cast iron, weighing a thousand pounds, we guessed without the benefit of a scale. Some carpenter in the past had cobbled together a solution to the aging bell supports, and now the old fix was worse for wear.

Working mostly from the inside (which made it more bearable to watch), Reroofer needed to transfer the weight of the bell while replacing the supporting structure, so he did so with an ingenious system of straps and come-alongs (and an equally gymnastic helper on Day Two of repairs). The supports were replaced with new, treated four-by-fours. When he finished, the bell hung a foot higher than before his work.

Tomorrow: Another definition: kampanaphobia. Click here to read it.

One thought on “‘It’s worse than I thought’”