We interrupt our storytelling to bring you this holiday message. 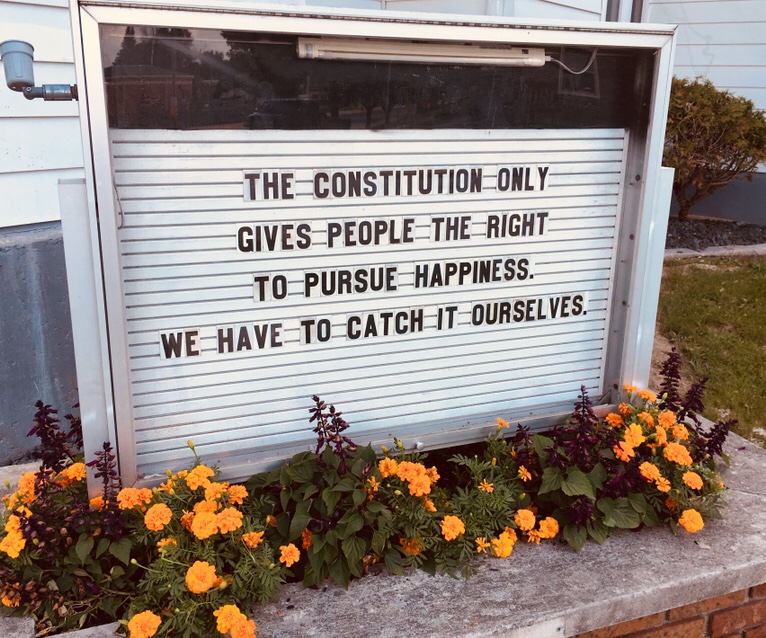 A version of this quote is attributed to founding father Benjamin Franklin, who said, “The Constitution only gives people the right to pursue happiness. You have to catch it yourself.”

If we’re splitting hairs, the U.S. Constitution does not explicitly call out citizens’ right to pursue happiness, but the Declaration of Independence that we celebrate today and which was signed by Mr. Franklin as a representative of Pennsylvania, did describe life, liberty and the pursuit of happiness as unalienable rights.

I changed “you” to “we” in Franklin’s last line because I think catching happiness is better achieved in community rather than by oneself.

May you find yourself among other happy revelers today. Happy Independence Day!

Tomorrow: If you think choosing paint was a trick, try trim. Read about it here.

Our story so far: As we prepared the blank slate in the old Methodist church we were renovating into our home, the 95 percent of demolition that was dirty was beginning to wear us down.

After weeks of demolition, we were practicing self-therapy.

“Wow, we’ve made so much more progress than I thought we would.”

“Well, we knew the belfry had problems. It’s no surprise to us.”

“You know, we can bring in an expert to discuss headers if we need one.”

“I need a break, too. Breaks are good. We can’t work seven days a week.”

We needed to be cheerleaders for ourselves because everywhere we looked, we were surrounded by dust and old nails, and around every corner was more to do. As Tyler walked contractors of various sorts through the building for quotes, more than one said, “You have quite a project here.”

Anyone who’s ever done a remodeling project already knows: Many contractors cannot be depended upon for anything, but least of all, encouragement.

Right about then, we took to heart a battle cry uttered by master carpenter and host Ben Napier in an episode of HGTV’s “Hometown,” who surely had faced mammoth home remodeling projects of his own: “That’s the way the great ones all start. People doubt them. Everyone doubts them, and honestly that’s how I think you become great. You prove them wrong. You prove the doubters wrong.”

So yes, it was a big project. Thank you for pointing that out. We were going to persevere and invite the doubters to the open house to show it off when we were done.

I also was attempting to let the church itself reassure to me during those quiet moments of uncertainty. There was this sign left behind on what was perhaps a Sunday School room door: “Please be patient. God isn’t finished with me yet.”

And the message painted over the inside of the entrance, to be seen by exiting parishioners and witnessed by me every time I carried another load of tools or wood upstairs or downstairs: “Go now in peace.”

This was reinforced by a little quilted banner I found among the Christmas decorations which said simply “Peace.” I brought it home, washed it gently (more gently than the poor Wise Man I’d defaced) and admired the excellent stitchery. And the appliquéd bell. It had a bell! This gem would find a spot back in the church.

And then there was the rock at the foot of the flagpole. I’m not sure what it was telling me but I found it compelling. It might have been a image of Moses with the Ten Commandments (or half of them? See? Moses was a writer, too), but it might also have been a saint or a significant Methodist figure. I think he was sticking out his tongue. I did a reverse image search for it on the computer, and I learned it was a relief, that is, a sculptural technique where the sculpted elements remain attached to a solid background. I went literal with my findings, as in “relief,” a feeling of reassurance and relaxation following release from anxiety or distress. Finding the church and working on it a little bit every day could be considered a relief: We found home.

Tomorrow: We make like Geraldo Rivera and go on an expedition. Read about it here.

Our story so far: Despite the raised eyebrows of our friends, I was sure a converted church would make a divine home, and I talked my husband into taking on the project.

I especially scoffed at the notion that a church might be haunted. One naysayer asked if I was going to burn sage.

Why would ghosts want to haunt a church? Only someone who didn’t attend church would suggest such a thing.

Church buildings are places of joy. Babies get baptized in churches. Couples get married. Children sing songs, and people celebrate holidays and anniversaries. Yes, people have funerals in churches, too. Funerals are sad. But people who have church funerals believe they’re going to heaven; they’re not going to hang around a church pissed off about the afterlife. And we had established, as definitively as you can without breaking ground, that no cemetery had ever been part of the property so we were confident we wouldn’t have a Poltergeist incident.

(Then I looked up what a sage smudging ritual involved. Sage smoke absorbs conflict, anger, illness or evil, according to Google. Couldn’t hurt to take an metaphysical shower, right?)

I have been accused of being naïve Pollyanna, so maybe when I said I was convinced we could successfully tackle this job, save money in the process and love our new digs, well, maybe I was wrong.

But I was also a fatalist who believed it did no good to resist the inevitable. Any house we purchased, or any lifestyle we adopted for that matter, could get us killed or cost us money or make us miserable if that’s what the future had in store for us. Not to mix my metaphors, but if we were going to go down in flames, we were going down in a church.

Tomorrow: Chapter 3 opens with a look into the maw of our first potential money pit. Click here to read.